It has been 10 days since I posted last and in that time we have traveled 4 of the days and have sat waiting for wind to die down on all of the other days.  But it has been fun with surprises we did not plan on.  So I had said in the last post that we planned to stay in Annapolis another night but when I took a look at the 3 weather/wind sights that we use for navigation planning, it looked like moving on Friday 6/16 made more sense because Saturday promised to be a windy day with possible thunderstorms.  Captain Al agreed so we took off late morning to head up the Chesapeake to the Sassafras River to an anchorage we used last summer.  Easy day of travel and always easier to go somewhere that we have visited before.  We dropped anchor and had a peaceful night on Turner Creek.  We woke to a cooler morning with fog and drizzle but up anchored and headed out of the Chesapeake to the C&D Canal (Chesapeake and Delaware).  This is a man made canal dug in the 1800's to shorten the distance for commercial traffic from Philadelphia to the Chesapeake and points south. Normally boat traffic can be busy in the canal but the day turned into the rainy one predicted so day boaters stayed home and we had no issue with the fog since few boats were around.  Just as we left the anchorage, we were hailed by Tug LeeLoo, a looper boat we  vaguely recognized, as they too had just left the Sassafras and were heading to Delaware City.  We exchanged travel information and then met up when we docked at the Delaware City Marina.  Turns out Nancy and Carey on board Tug LeeLoo have traveled extensively with our friends on Sum Escape and we figured out we also had actually met at the Joe Wheeler Looper Rendezvous in October 2015!  Our small world only gets smaller! 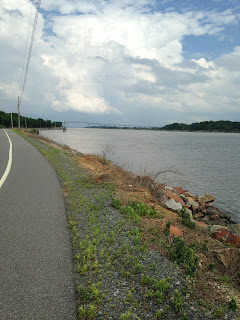 So we tucked into Delaware City for what we thought would be a 2 night stay due to wind and waves on the wide Delaware Bay and met up with 2 other looper boats.  This is the view from a great walk/bike path along the C&D Canal.  So with a cute town, a place to walk and new friends, all was content in our world.  The dock master at Delaware City provides a nightly review of wind, wave and current conditions on the Delaware River and Bay and managed to terrify us all with stories of ship wrecks and tough conditions on the Bay.  And we looked at the NOAA reports ourselves and we all voted to wait a 3rd day before tip toeing out into the mighty Bay that would take us to Cape May, NJ on Tuesday, 6/20.  We became buddy boaters with Tug LeeLoo. 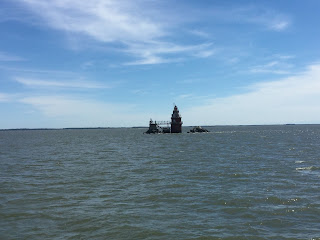 This was the choppy water we traversed for 5 hours on our way south to Jersey.  Motion Eaze got a work out that day but Captain Al was unfazed and got us into the Cape May Canal safely and efficiently!  I would not be on this adventure with a less able captain and am thankful for his skills! BTW this is the Ship John Shoal light house which is about where the Delaware River ends and the wider Delaware Bay begins. 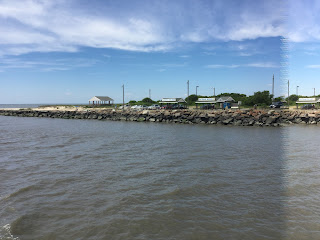 This is the well protected calm waters of the Cape May Canal.  A pushing current was the only challenge along this part of the trip.  We pulled into the Canyon Club Marina in late afternoon and enjoyed docktails with Nancy and Carey later that evening.  I took advantage of the great courtesy van and hitched a ride into the darling town of Cape May and took my daily walk late afternoon.   We have a very good friend from Al's racing days, Joan Farrell, who now lives in NJ, not far from Cape May.  So after looking at the Atlantic conditions for the next several days, we made a plan to stay put for 2 nights and enjoy a visit from Joan and her friend, Matt on Wednesday. 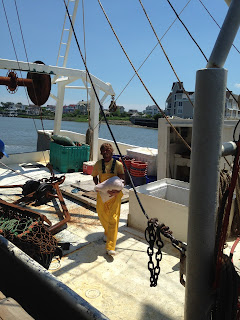 They took us to the Lobster House which is a combination of 4 different casual restaurants on one big pier that also serves as a place where scallop boats off load their bounty.  This is a crewman carrying a white cotton sack full with 52lbs of shucked scallops.  They had 10 of those bags to off load, bringing in a hefty pay day. And we had the most delicious lunch of fried scallops!  Yum! 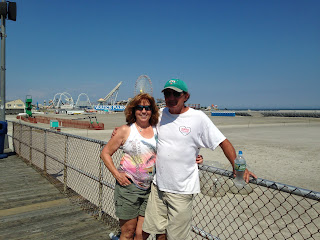 After our great lunch, Joan and Matt gave us a tour of the area taking us to Wildwood beach which has a large amusement boardwalk with the rides that make NJ beaches famous.  We enjoyed looking at the rides and all the gaming stalls. 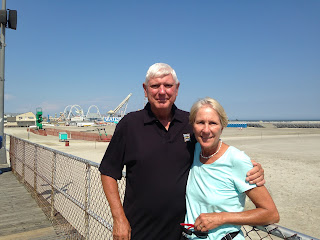 It was a lovely day to enjoy the good ol' Jersey shore.  (I grew up in Jersey so have fond memories of family vacations and even my first date which was a day at a beach boardwalk a long time ago!) 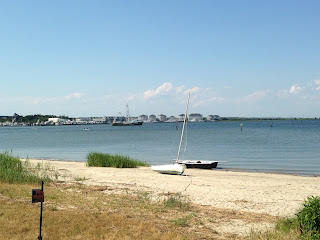 We stopped at a memorial to lost sailors and watched this scallop boat head out to scrape the ocean bottom for scallops. 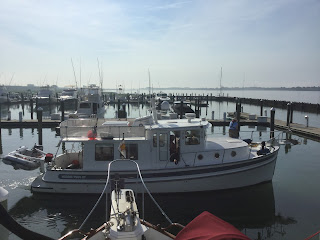 The weather was on our side on Thursday, 6/22 so Tug LeeLoo headed out to lead our way north to Atlantic City.  We were lucky to find fairly calm seas and had extra fun because Joan and Matt joined us for this leg of the journey. Matt has spent all of his life in the south Jersey area so knows the coast in great detail so we enjoyed a sight seeing trip as he pointed out all the highlights along the way. 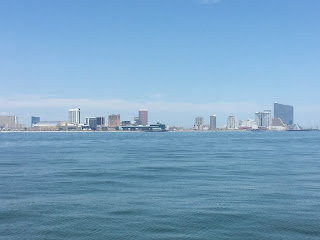 This was our view passing by the casinos along the Atlantic City boardwalk.  The 3 at the right end of the picture are all sitting empty.   Atlantic City is not thriving any longer since gambling is legal in so many places these days.  On the left side of the picture is the low level, rounded roof building, Boardwalk Hall which is a well known and very old concert venue. 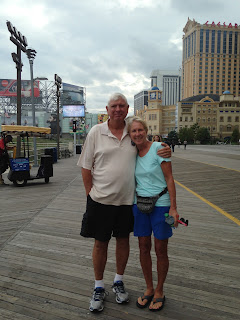 Since once more, the winds were kicking up the Atlantic, we have been socked in at Farley State Marina in Atlantic City for 4 nights.  Which seemed like a bummer on the first day. Then we discovered the "Jitney" which is a bus system that took us to the boardwalk for lunch with Tug LeeLoo crew on Friday.  It was chilly with the winds off the Atlantic but we had a tasty lunch!
Then we enjoyed strolling the AC boardwalk. 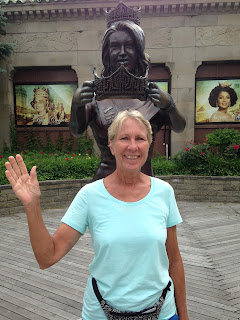 Of course Atlantic City is the location for the Miss America Pagent and I posed for my crowning along the boardwalk.   A moment of glory!  So spending time in AC with friends has been a fun experience.  And yesterday, Saturday, Matt played tour guide and drove us to visit Lucy the Elephant in Margate, NJ. 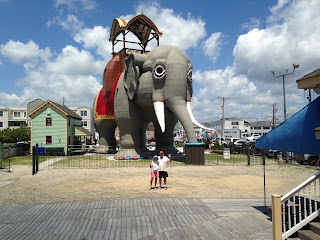 She is an historic landmark, built as a tourist attraction and as a way to bring people to the area to buy beach homes by a real estate developer in 1881.  She is 6 stories tall and we enjoyed taking the tour inside her belly and head.  We could look out the windows that cover her eyes and see the ocean.  Apparently that helped to make us young again per legend!  Matt gave us a tour of Ocean City, NJ where they have a rental beach house and we had a great lunch at a local dairy bar.  We surely would not have "met" Lucy if the weather had been favorable for travel!  Then last night we had the treat of all times as Dionne Warwick performed at the Golden Nugget which is the casino next to our marina. We strolled down memory lane as she sang many of her old and familiar songs.  We realized that this was our first concert of this type that we ever attended together!  Thank you wind!  Today is another lovely day in Atlantic City so off to the casino pool we go. Tomorrow promises a good cruising day so we will follow Tug LeeLoo out of here and head north for another leg of the journey!