Since we both grew up in the suburbs of NYC, we had plenty of opportunity to tour around and see most of the stand out landmarks of the City.  But today was spectacular, seeing New York from a water perspective and traversing under so many bridges that we crossed over via car years ago.  We did our research about the East River which has strong currents that follow the tidal changes.  So after reading that the best start from the Battery on up the East River should be timed about 2 hours after low tide, we bit the bullet and set an alarm so we would leave our mooring in Great Kills at 6:30ish.  But we both found that we didn't need the alarm because anticipation of such a great day got us up with the sun on our own!  The pictures tell the story. 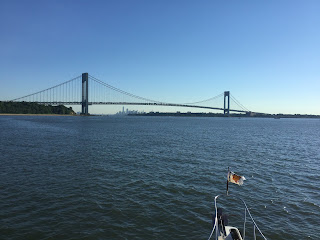 It was a thrill to approach the Verrazano-Narrows Bridge that crosses the  Narrows section of New York Harbor from Staten Island to Brooklyn. 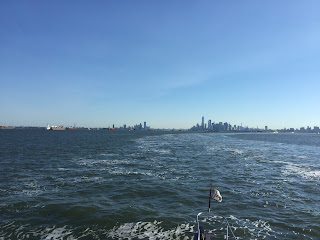 Just under the bridge our view was of choppy water from lots of boat wakes and the beautiful skyline of New York on the right and Hudson Exchange, NJ on the left.  While Al did a great job of dodging fast ferries and water taxi's, my job was to call out what was coming up on either side of our stern.  It was both exciting and mildly frightening to weave around cargo ships  on moorings waiting to off load their wares and avoid big wakes thrown by the ferries! 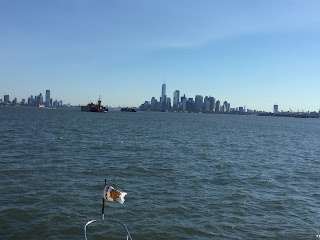 And then far off up the harbor we could spot Miss Liberty welcoming us to her enormous city! 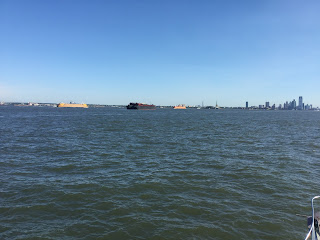 The yellow ferries are the Staten Island Ferries that my family would occasionally use as a way to get into the City without having to find parking for our car in the City limits.  Al being from Long Island didn't remember ever being on one of these ferries. 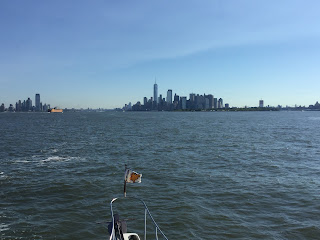 The skyline grows as we head north. 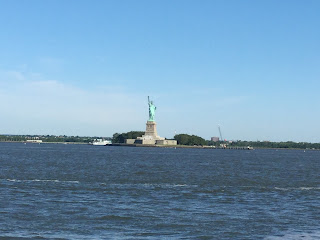 This was as close as we got to the Statue of Liberty because at this point, our path took us to Starboard to head up the East River.  Next year, when we continue the actual Great Loop route, we will head north up the Hudson River and get closer to Liberty Islalnd. 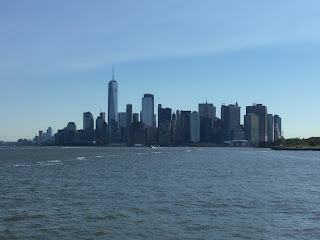 One World Trade Center stands out not only as the tallest building in New York but also in the USA. 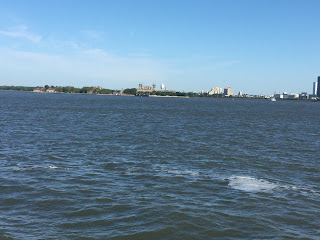 In the distance we could see the main building on Ellis Island which a google search noted is acttually mostly in New Jersey! 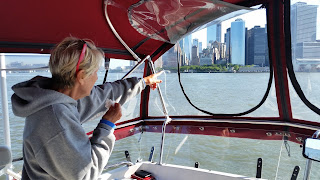 Along with watching for passing boats, ships and ferries, my job was to use google maps to identify landmarks along the way and snap pictures for this blog!  It was a very busy morning for us so all the wake/wave action never causeda a bit of motion sickness! 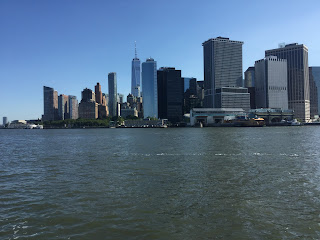 This is the closest we got to the Battery and the lower Manhattan skyline.  We made it to this spot at about the right time to catch the current pushing east so we moved along smoothly into the east River.  One World Trade Center stands out with its 104 stories.  Someday we need to go up to the top to enjoy the view. 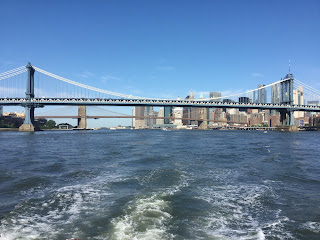 After crossing under, first the Brooklyn Bridge and then the Manhattan Bridge I took this shot looking back at their grandeur. 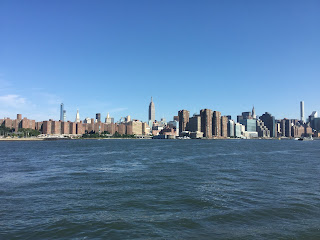 As we passed Roosevelt Island, we could spot the Empire State Building in the distance as it stands on 5th Avenue.  It is a mere 102 stories tall so is the 3rd tallest building in NYC. 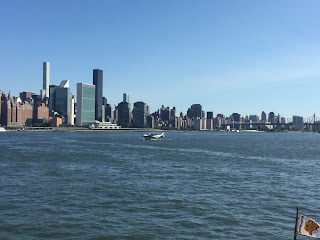 Then all of a sudden a small plane swooped down along our starboard side and landed on the water.  Must be some rich person on their way to a business meeting! In the background is the Queensboro Bridge. 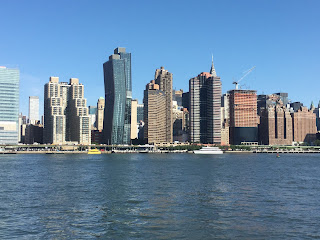 We passed by this unique crooked building which is actually 2 buildings created to look like dancing partners with an adjoining walkway. 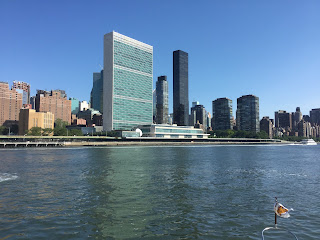 This rather dull looking building is the United Nations but when it is not in session, all the colorful flags are put away.  Perhaps we will pass by again in September when it will be in session. 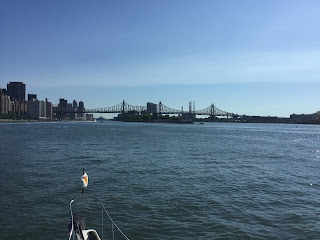 I had to google "pictures of bridges" and use the Garmin chart and google maps to try and name this bridge and my best guess is that it is the Williamsburg Bridge. 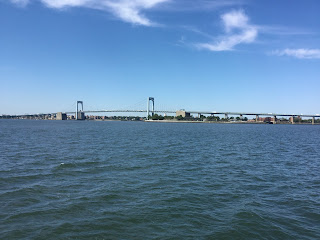 Our last bridge of the day was the Throgs Neck which I crossed over many times, driving from NJ to Long Island and Al did the same in the reverse but not for dates between us as Al lived in Ohio by the time we met! 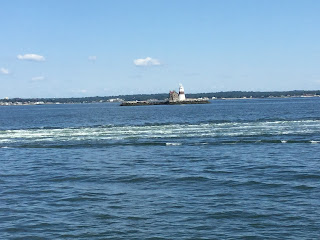 We passed this light house on Long Island Sound as we headed out to our destination of Lloyd Harbor off of Huntinton Bay where Al learned to handle boats.  We had a mooring available for our free use while visiting an old high school friend of Al's, Dale Stokkers and his girlfriend, Nancy. What a wonderful day we had!