"Catching" Fish Without a Line!

Today we are floating on anchor in the grand Chesapeake Bay but I meant to post our Carolina travels  a few days ago and got delayed by sketchy service and then had too much fun socializing with new friends so didn't have time.  Therefore this blog is strictly about North Carolina and a post about our fun so far on the Chesapeake will just have to wait.  Our wonderful fish experience occurred in Beaufort, NC, a town we never stopped to visit the past 2 times through.  Boating friends recommended Homer Smith Docks as a great stop so that is where we landed and thoroughly enjoyed.  The marina is a wholesale dealer of fresh fish and we lucked out with a new delivery on Monday 6/5 and were treated to fish filleting lessons. 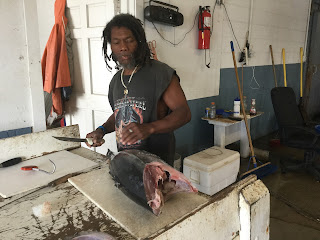 We decided on buying tuna, grouper and mahi-mahi.  First out of the freezer was this 25lb tuna and in order for us to buy 2lbs for our own consumption, the entire fish had to be filleted by this expert dock hand.  Didn't know all the blood flow in a tuna is in its center along the spines and that area was cleanly removed because it apparently tastes bitter. 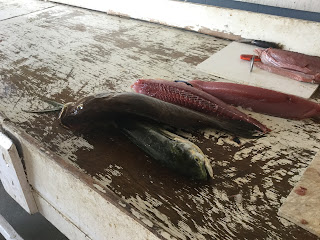 Next up was the grouper on the bottom and mahi-mahi lying on top.  Note the cleaned tuna fillets sitting on the table next to the other fish.  Those fillets were just waiting to be sliced into the most delicious steaks we have ever eaten.  It was so soft and tender and fresh! 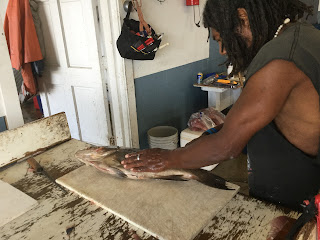 Our grouper was filleted to perfection, yielding 4lbs of fillets so we bought the whole thing.  It later became delicious grouper Rueben sandwiches which I have developed a taste for since starting this cruise.  Our mahi-mahi yielded 2lbs of fillets so half is vacumm bagged in the freezer and the other became another delicious dinner.  So we had a heathy fish eating week and still have plenty in the freezer to enjoy soon. 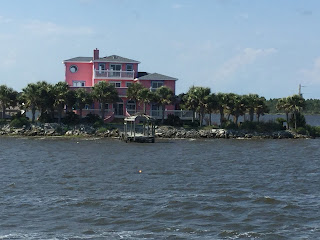 Someone must love pink!  This shot was taken on Sunday, 6/4 as we cruised between a perfect anchorage at Carolina Beach and a peaceful anchorage near Camp LeJeune called Mile Hammock.  Going ashore at Mile Hammock is not allowed because it is a Marine Corps Base Camp so we had to tough it out with 2 days of walking on the busy beach next to our anchorage at Carolina Beach.  We actually didn't drop anchor at Carolina; we were able to pick up a mooring ball for a nominal fee.  And this location turned out to be a wonderful choice because it was in a "No Wake" zone that the locals actually adhere to.  That's the difference between polite North Carolinians and the more rude Florida boaters!! From Mile Hammock we went to the Beaufort stop and from there to an anchorage just off of Goose Creek on Eastham Creek. 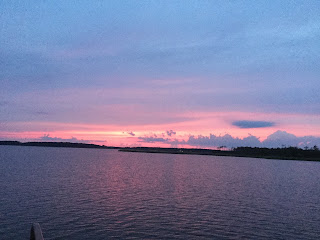 Eastham Creek was also very peaceful as we had it all to ourselves.  We had some beautiful, wam but breezy cruising days until this point and enjoyed this colorful sunset as the cloud cover increased bringing some light rain and drizzle.  Wednesday 6/7 promised more light rain and a change from light winds to heavy wind and eventually more heavy rain.  So we treated ourselves to a tie up at Dowry Creek Marina on the Pungo River after crossing the Pamlico Sound without issue.  (We were lucky that both the large Neuse River and the wide but shallow Pamlico were not terribly rough with wave action). 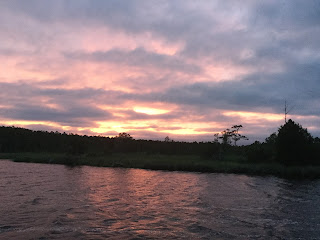 Once again, the gathering of clouds made for a lovely sunset to end a particularly fun evening on Wednesday.  Upon arriving at Dowry Creek, we discovered 3 other looper boats so instantly made new friends!!  So we used the clubhouse for docktails and enjoyed swapping boat stories. One of the boats was being driven by a single guy which is no easy feat to take on the Loop without another set of hands.  Another of the boats was crewed by a young family with 2 elementary school aged girls who have enjoyed a great adventure while being home schooled by Mom.  And the third set of boaters was a couple with similar interests as us so we have done a bit more socializing with them in the past couple of days. Linda and Jim on Leilani have joined the group of Looper friends that we hope to stay in touch with for a long time. Because we had so much fun meeting new Looping friends and the weather on Thursday was not good for boating due to 25 mph winds, we stayed a second night and had a "lying low" day followed by a second round of docktails!  That turned out to be special for Al because a 65' Fleming came in, crewed  by Gary and Joanne who Al enjoyed getting to know. They had some great insights about cruising the Northeast coast so the bits of knowledge about where we are heading continues to grow. 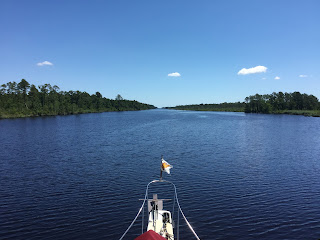 Friday we had a crystal clear blue sky and only light breezes so it was an easy travel up the Pungo-Alligator Canal which is a man made cut to connect the two waterways.  Unfortunately, we next had to cross the wide expanse of the Abermarle Sound and even though our wind was minimal, the water was still stirred up from the day before so we had constant rocking from waves hitting our beam (side of the boat) causing sideways rocking which is the hardest to tolerate.  I did give my new seasickness medicine a try (Motion Ease) and it did a great job in keeping me from feeling nauseous.  It was not a comfortable crossing but didn't make me sick. 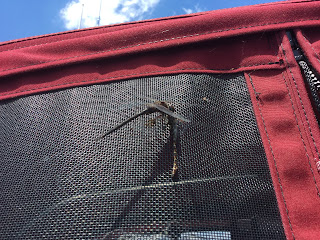 These two dragonflies used our back screen to connect up for what looks like a little "nuky" along the way.  We ended our day on Friday 6/9 with a stop at Coinjock Marina to take on fuel and water and get set for some anchoring on the Chesapeake which was one travel day away.  This left us with 15 miles left in North Carolina and our arrival in Norfolk on Saturday.  More about that fun stop in the next blog post.  Thanks for following with us along this adventure!