When folks doing the Great Loop complete the entire loop of 6,000+ miles, they earn the right to lower the white burgee and raise a gold burgee with the Great Loop insignia, thus they become "Gold Loopers".  The couple on Leilani that we met last week on the Pungo River had completed the loop but chose to raise their gold flag when they "crossed their wake" in Annapolis, their home port and we were lucky enough to be there with them. 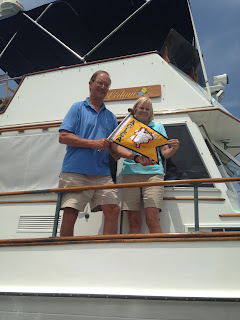 Jim and Linda are happy to complete such an accomplishment and sad to end the journey for now.
We met up with them again when we arrived in Norfolk last Saturday 6/10 as we all chose Tidewater Marina on the Portsmouth side of the Elizabeth River because as luck would have it, Norfolk was celebrating its annual Harborfest weekend and the surrounding waters were loaded with boats on anchor.  We had just learned of the festival so changed our plans to anchor a bit further north and lucked out with a slip at the Tidewater which was right across the river from the huge fireworks display.  The place was hopping with music and food, loads of boats and people ready to party.  We ate out in the old city of Portsmouth and made it back to the boat just in time for the start of the fireworks. 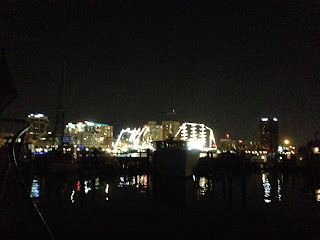 Norfolk's waterfront was decked out with lighted tall ships. 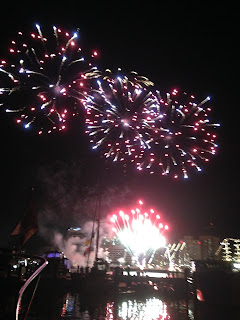 This was a spectacular display that we watched from the bow of our boat. 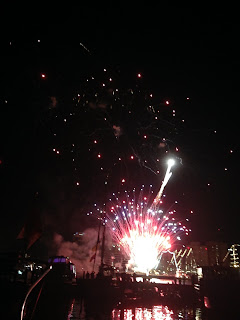 It was an unexpected great night! Then on Sunday we cruised on our own, not expecting to see Leilani again and picked an easy anchorage at New Point Comfort Bight on Mobjack Bay. 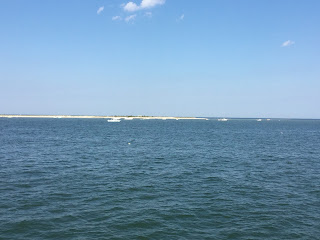 This is a popular day anchorage so boaters can play on the white sand beach. We had a beautiful sunset but you can see the chop in the water.  We picked this anchorage because the prediction was for a calm night but predictions are not always true and the wind picked up through the night making this spot not comfortable as the name implied!  Oh well, another lesson on anchoring learned and we know how to cope with less sleep so on we went on Monday. 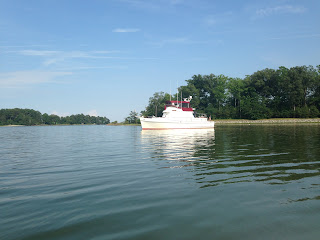 This time we agreed on a protected area that we have been to before on Mill creek off the Great Wicomico River.  Of course it was sweltering hot with no breeze since we had such good wind protection from the trees! And I spotted the first nettles in the water so swimming was ruled out! But I did get my daily walk done by taking the dingy to a little marina that allowed us to tie up for an hour.  Al is walking short distances these days to keep the hip pain to a minimal ache so he enjoyed a breeze under a gazebo at the marina. On Tuesday we cruised further north passing by this active navigation light that we never did determine a name for on our way to Solomons Island.  It was a lovely cruising day with a light breeze and some cloud cover to keep us cooler.  We crossed the Potomac so are now in Maryland.  Our stay that night was in Solomons Island Yacht Club because it was the home port for a harbor host who has set up a deal that non yacht club members could use the club as members of the AGLCA.  Thanks, Doug Smith and also a big thanks for driving me to a grocery to restock our larder!  We even enjoyed a free cocktail at their club bar and enjoyed meeting some local boaters.  Solomons Island is a cute little town that has a good walking path for me.  Wednesday started as a lovely day with a light breeze until we poked our nose into the wide open waters of the Chesapeake and for the next 2 hours we plowed into 2-3 foot waves making for a rough ride.  The good part was that the waves were rolling with a north wind so we didn't rock sideways so motion sickness was not an issue.  Eventually the wind and waves calmed so the later part of our trip was more comfortable.   Our destination was Annapolis and lo and behold, we were hailed by Leilani with the news they too were heading into Annapolis and planned to catch a mooring ball in the harbor in front of the Naval Academy.   It turns out, there would be Wednesday night sailing races that end in the harbor. 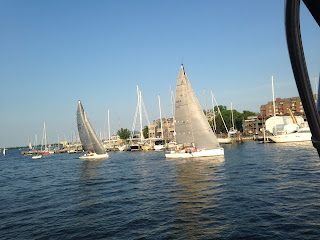 Since it was the celebration night for Linda and Jim, we watched the racers on Leilani with their friends and had an enjoyable night. 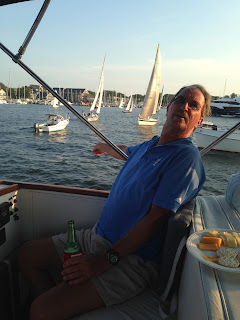 Jim raced many sailboats for years so thoroughly enjoyed watching and explaining the ins and outs of racing to Al. 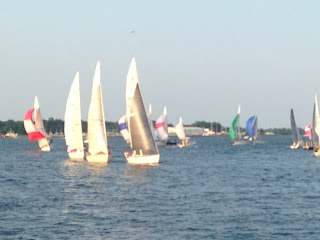 It was a busy harbor with these beautiful boats racing in to end their races.  They dropped their spinnakers as they came into the more protected harbor because they lost the wind that filled the colorful sails.  These boats are pricey, worth as much as $250,000! 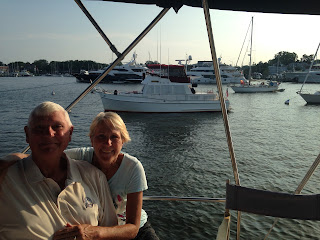 InSpeyered 2 sits next to Leilani in the mooring field. 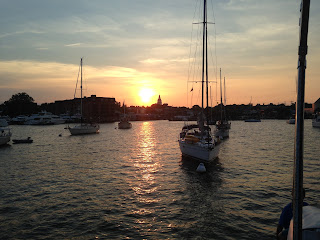 We were treated to a beautiful sunset over the Annapolis skyline.  Annapolis is a lovely city with many old structures that are well preserved.  So today, Thurday, after I walked around the State buildings, we had a great lunch with Linda and Jim at our old favorite, Chick and Ruth's to have our first taste of crab cakes on the Chesapeake.  Yum, they never fail to live up to our expectations. 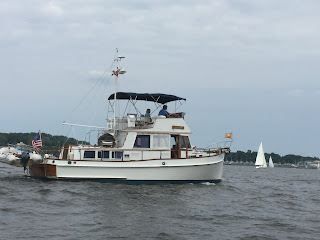 After lunch, Leilani headed up the Severn River to their "dirt house" to settle into land life and we had to say goodbye to new friends.  Maybe on the next loop, we will again meet some of the great boaters we have traveled with so far.  Our plan now is to spend one more night here in Annapolis and then continue north slowly.  The Atlanic is not being cooperative with high waves right now and that will be our path around New Jersey.  The inside waterway in NJ is too shallow for our draft so we have to run outside.  We are about 3 days of cruising away from Cape May, NJ but there is no good weather window for at least the next week.  We'll have to figure out what to do with our time while waiting.  There are worse things in life!