A few more bumps in the road!

Thursday, October 29 started out with a nice walk in a campground and the day warmed up.  We had a plan to lock through Bevill Lock, dropping another 30' and head to a cove about 40 miles downriver.  We knew 2 other looper boats had locked through ahead of us and also intended to over night in the same cove.  There are minimal choices the closer we get to Florida.  But just after we entered the lock, 4 other boats cruised down the waterway and locked through with us and then took off faster leaving us as stragglers.  So after using all the tools we have for navigation, we made a new plan and proceded on our way. 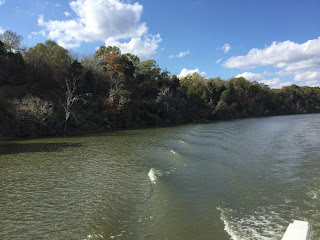 Not a great photo but I was trying to capture the tree moss growing along the bank, we are truly in the south now! 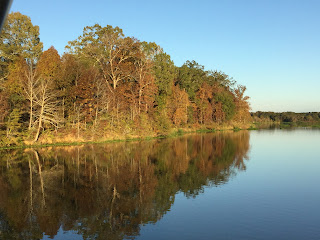 Smooth sailing!  But as we got closer to our destination which was a cut off from the waterway onto the Tombigbee River (as the river crosses the waterway, the curves of the river are called ox bows)  I called the next lock master  to see how much water was being released from the dam into the ox bow we intended to stay in.  He informed me that because of dredging oporations, we could not enter it.  To make a long story short, we were in a pickle!  We were the lead boat in our group of 3 so we nudged into the original choice for coves only to find it crowded with boats and shallow in parts.  So Al made the decision for us to backtrack to a cove back up river, one of our friends chose to tie up with a boat in the cove and the third took their chances and proceded through the next lock and anchored in the ox bow as the dredge captain said "come on down we'll make room for you".  So the night ended with our little group split up but all safe and sound.  The better decision was to stick to the plan and head to the ox bow, oh well!! 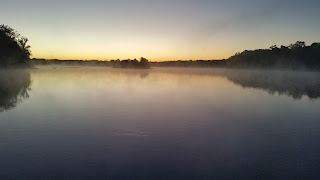 Al took this as the sun rose yesterday morning with sea mist floating above the water.  The air was crisp and cold. We headed down river early in hopes of catching up to the loopers and lucked out by reaching them just before the lock gates closed. So on we went on the last leg of the journey to the large marina and fuel stop in Demopolis, Al. 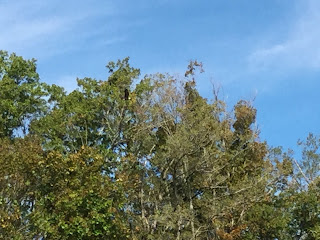 Not sure if you can see the eagle in the tree. 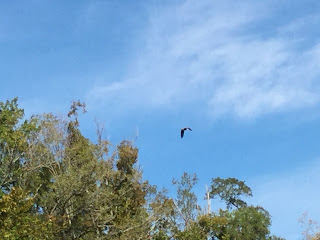 Our eagle taking off, so magestic in flight. 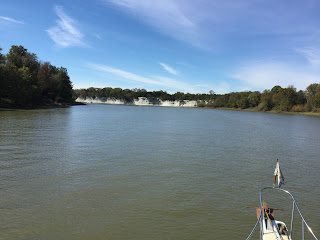 Here we came upon the white cliffs of Epes and if you have sharp eyesight, you may see a tiny speck just below the left side of the cliffs which is Sandrobber our buddies that are in the lead boat today.  They are the ones who spotted the eagle for us.  Good to have travel buddies for many reasons! 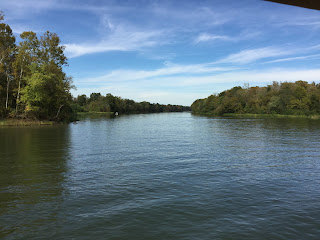 This is the Black Warrior river which enters the Tenn-Tom and runs with it to Mobile Bay.  Its just like highways that run together at times and split off as well.  So this water highway was our route to get to Kingfisher Marina in Demopolis which is where we sit waiting for more rain and storms.  Spending Halloween with at least 20 looper boats gathered at this luxurios marina.  Last nights shower was the best so far.  We will stay here until Monday and then continue the run to Mobile.  We hope the crowd of boats will thin down and spread out because anchorages are few and offer limited space all the way to the Gulf.  Wish us luck!!