Cruising in the sunshine!

Wednesday morning dawns bright with the sun and the lock around the bend from the marina is open and ready for us.  So we lock through the Stennis lock which dropped us 27 more feet and onward we travel as a group of 3 boats including California Lady and Sandrobber, the folks we helped a week ago with lines at a State Park.  The new friendships keep swirling around making this trip very special! 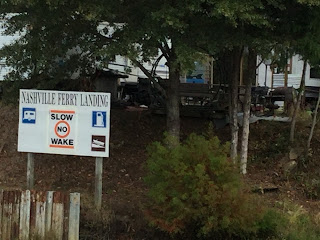 We got a chuckle as we passed this sign, not sure if it is serious or a joke, but it made for a good picture. 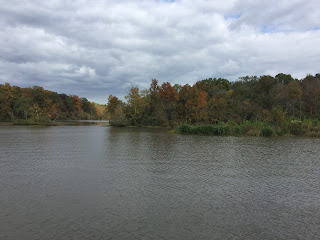 With the sun partially shining, we get some glimpse of fall colors that are not fabulous as we are too far south, but we were reminded that it is October. 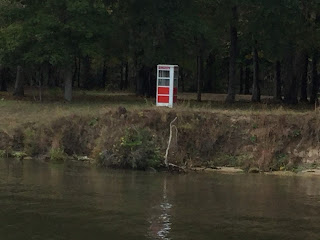 Yes, this is really a phone booth and I am quite sure this is a joke and another great photo opportunity!  The Ten-Tom moves between Mississippi and Alabama several times as we cruised on Wednesday.  But by the time we reached Pickensville, AL we were finished with the Mississippi part of this journey.  After dropping anchor in a widespread embayment, Al dropped Victory Lap into the water and played water taxi to take our friends' dogs to shore.  Then we dingyed (spelling?) a short way to the Tom Bevill Vistors Center where the Snagboat Montgomery is "on the dry" as a museum along with an antebellum mansion that provide information about the history of the Tenn-Tom waterway.  We took our walk on the center's grounds and had fun watching a large tow lock through the Bevill lock. 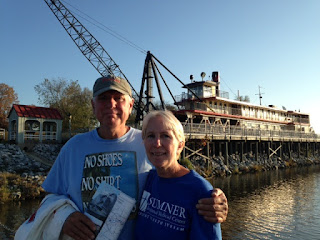 The snagboat built in 1926, used to pull trees and other major obstacles to keep the waterway clear for commercial traffic. 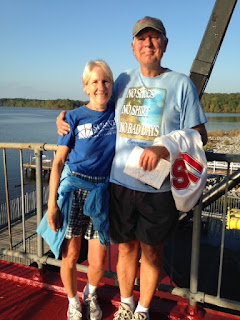 Note the nice haircut!
It was a good day until we came back to the big boats and noted ours was not turned in the breeze in the same direction as the others.  That could only mean it was holding still because it was mired in mud.  Victory Lap has a depth finder and told us that the boat had swung putting the stern in water less than 3' deep and we need 4.5'!  Thank goodness a nudge from the whaler against the haul moved it meaning we were in silt so Al was able to slowly move Inspeyered to deeper water to reanchor for the night in safe water.  Once more I am grateful for Al's level head and great captain skills!!