We are truely heading due South to out run the cool weather and find winter warmth! 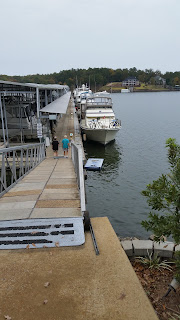 I mentioned that there were many looper boats gathered at Aqua Yacht and Al captured this photo of a new friend, Nancy, and I walking down to the transient dock after yesterday's morning walk.  As far back as you can see, these are all looper boats. 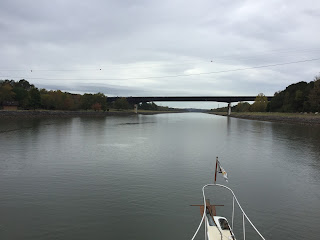 Yesterday was a gray day of cruising the "ditch" and then entering Bay Springs Lake to find anchorage in a beautiful eagle sanctuary on one of the fingers off the wide lake.  Problem was, it was so gray that no picture would show the lovely color changes in the trees and of course we saw no wildlife at all let alone an eagle!  Not even an owl hooted  last night as we slept listening to rain on the decks and water. 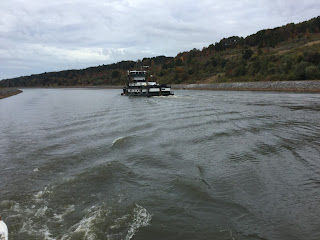 Passing a tow boat, he stayed in the middle of the ditch while we scooted close to the side to ride his wake! 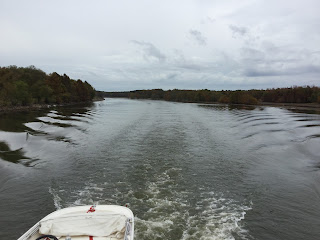 Leaving the ditch behind and entering Bay Springs Lake.  This lake was farmland and forest before the ditch was dug, hard to picture. 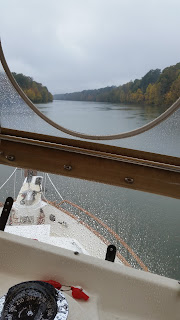 Today continues to be cool and rainy and upon hearing that looper boats were nearing the Whitten lock around the bend from our anchorage, (Al often has the radio on so he can hear folks hail a lock) we quickly upanchored and cruised to the lock just as it was opening for 2 other boats.  The day was spent traveling with the other 2 boats, 6-8 miles between locks and after going through 4 of them we had lowered 169'. 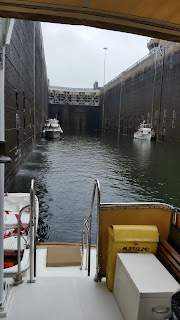 Whitten lock was the deepest that dropped us 85', the others were much more shallow, droppping 25'-30' each. 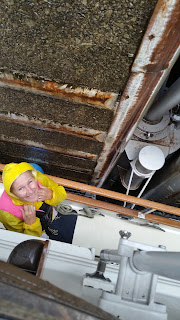 Al is above supervising my expert looping of my midline around the bollard and then I remain, standing guard watching the poor bumpers get squished as they keep the boat off the slimey sides of the lock walls!  The rain quietly drops on my head! 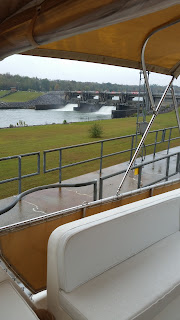 Fulton lock was the last of the day where water was gushing from one side to the other to make energy for electrical consumption. 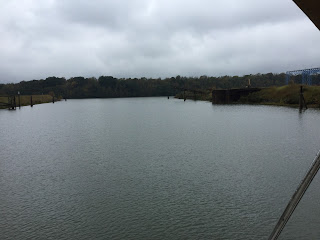 Our "lovely" stop for the day!  Ugly all around but a spot that can provide wind and wave protection for the night.  It is only 2:30 but so dreary it looks like night is coming on quickly.  The next lock is 15 miles away with no other stops before it or soon after it, so we take a break from cruising. 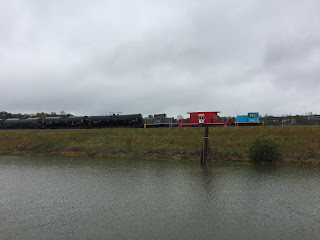 This cute little caboose is situated next to us! 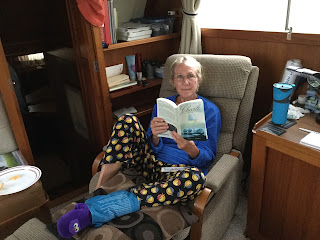 This is what a relaxing first mate looks like after cruising in the rain, with ice on the ankle, the remains of lunch on the plate and a fun new book to read entitled "The Golden Age of Charli RSVP" written by an old friend of mine from Ohio who has moved from being a terrific Speech Therapist, to a lawyer and mother and now a published writer!  Cheers to you Jena C. Henry!